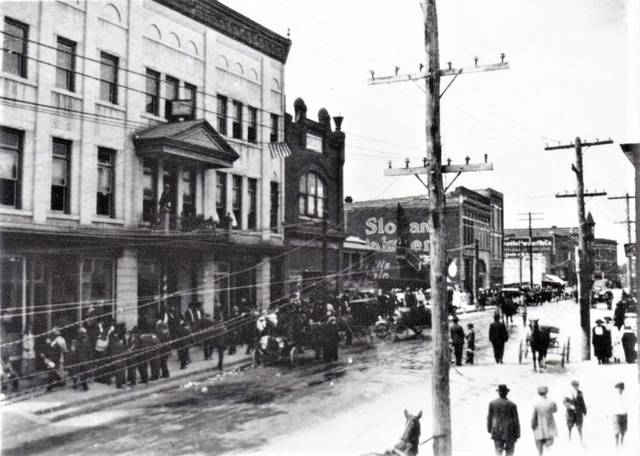 A look back at the region’s past

On Sunday May 6, 1759, a man went to the Moravian settlement of Bethabara with a small child. A series of deals broken by British military leaders angered Cherokees across the region. There have been attacks on captured farms, horses and food stores, and sometimes people have been killed.

The recording of the unnamed man bringing the child he found alone to an empty house in the Moravians is one of the earliest recordings we have of Hollow, the place we know today as by Mount Airy. It was then a sparsely populated primary forest filled with natural resources and hunted by wolves and panthers.

In February 1760 there was an attack on Fort Dobbs followed by the murder of William Fish and his son at their farm in Hollow in March. Families from all over today’s Surry County have flocked to the safety of the fortifications of Bethabara and Bethania.

The Moravians often came to Hollow to hunt, gather medicinal herbs and mushrooms, and search for granite to make whetstones and grindstones. They cleared a carriage road from Bethania to Hollow in 1762, roughly the path of US Highway 52 today.

In 1770 a petition was presented to the royal colonial government to create Surry County from the much larger Rowan. Due to mounting tensions caused by regulators at the time, however, it was not acted upon until January 1771, 250 years ago this month.

As we say goodbye (with a collective sigh of relief) to 2020, let’s take a look at how the Hollow has changed.

1761 – Irish immigrant and French-Indian war veteran Captain Andrew Bailey registers one of the oldest land titles in present-day Surry County, just east of where Mount Airy will be located .

1771 – April 1 – The county of Surry is created. It included all of the present-day counties of Forsyth, Stokes, Surry and Yadkin.

1789 – Stokes is created from the eastern half of Surry just in time for the first US census.

1801 – Postal routes, the routes used to move the young nation’s mail, were announced annually as an act of Congress. Mount Airy is listed as a stop on the weekly route from Salem & Bethania to Grayson Court House, Virginia. It was the same year that Thomas Perkins bought a farm on the Tarrat (Ararat) River near the current college site and named it â€œMount Airyâ€. The intersection of Hamburg and South Main streets was the business center of Mount Airy until around 1900. No evidence has been found to date that determines who came first; the name of the farm or the name of the emerging town.

1811 – First school established at Mount Airy by Professor Hickman near the Playhouse. There would be a school on this property, without interruption, until Rockford Street School became the home of the Surry Arts Council in the 1970s.

1840 – Jacob Brower establishes cotton and woolen mills in the Hamburg region. The census counts 15,079 people in the county (still including Yadkin). In 1935, historian Jesse Hollingsworth determined that the area that is now County Surry was occupied by 3,925 farmers and 294 manufacturers and traders and their families.

1870s – Winston Fulton, James H. Sparger and others establish several tobacco factories in and around Mount Airy. The Mount Airy News and Surry Visitor, the area’s premier newspapers, are starting to appear.

1888 – The railroad arrives, triggering an explosion in manufacturing which, in turn, caused a population boom. The exploitation of the quarry began in 1889. The first furniture factory opened in 1896.

1920s – Textile manufacturing becomes a major economic driver with factories such as Mount Airy Knitting / Spencer’s, Renfrow Hoisery and others redeveloping warehouses and factories from tobacco to clothing production. This decade saw the population of Mount Airy surpass 6,000 and the county reach nearly 40,000.

Today, the Census Bureau estimates the population of Surry at 72,000 and Mount Airy at just over 10,000 (official 2020 tally numbers will be released in the new year). The changes continued. Something good. Some bad.

What hasn’t changed, however, is the ability of people here to pick themselves up, dust off and reinvent themselves no matter what.

We here at the Mount Airy Museum of Regional History wish everyone the best and the brightest New Years and look forward to collecting the new stories that the people of this region are creating as we move forward.

Kate Rauhauser-Smith is the responsible for visitor services for the Mount Airy Museum of Regional History with 22 years of journalism before joining the museum staff. She and her family moved to Mount Airy in 2005 from Pennsylvania, where she also participated in museum and history tours. She can be reached at [email protected] or by calling 336-786-4478 x228

No new corridors, but business travelers exempt from quarantine

Did NYS Trooper try to rip off Walmart with a fake return?